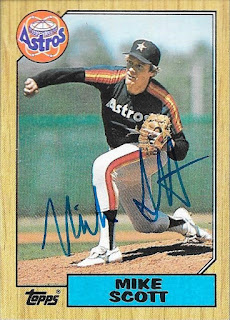 I added another card to my signed 1987 Topps set when I took part in a private signing with Mike Scott.  I had looked at buying some of his cards a while back, but never pulled the trigger.  I added this one, though, and can now cross him off of my list.

I mailed to the signing on October 15 and got the card back on November 7, for a 23-day TAT.
Posted by William Regenthal at 6:09 PM