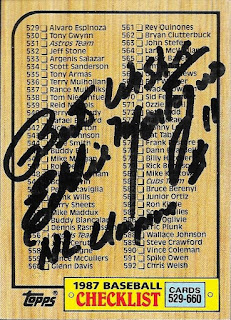 I still have a huge stack of 1987 Topps checklists, and I have been thinking of ways to use those for my set, and also some other things I may be able to do with them.  I sent a couple off to some umpires who were working that season.  I also may branch out and send some to other folks that accomplished things in 1987.  We'll have to see about that, though. 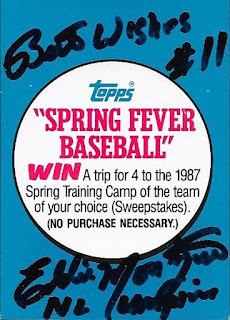 One of the umpires I sent to was Ed Montague.  Since I had the 87 checklists, and some other miscellaneous cards from that era, I sent an assortment of stuff for him to sign, and they all came back.  I was able to get this mini Spring Fever Baseball ad card signed.  I have a ton of these for some reason (why can't I throw stuff away?), but they have come in handy in the past when looking for something for someone to sign. 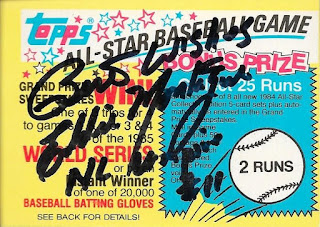 These Topps All Star Baseball Game cards are pretty cool.  I think they came from 1985 Topps.  I'm not certain; either 84 or 85.  I got one of these signed in the past by Bobby Brown.  I have several others, so I will probably get those signed as well. 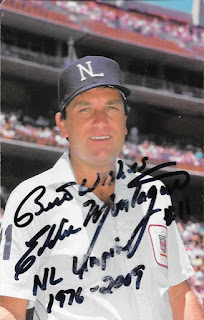 Finally, Montague sent his own photo that he signed.  I appreciate that he did that; it will go in my post card album.

I mailed to Montague on October 28 and got the cards back on November 12, for a 15-day TAT.
Posted by William Regenthal at 6:31 PM