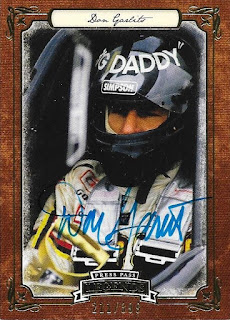 During my COMC buying run, I came across this card of drag racing legend, "Big Daddy" Don Garlits. I saw that he had signed ttm back in 2014  I believe, so I took a shot and sent to him. The card cake back signed and looks really cool. I just wish I had found one with one of his cars.

Garlits (b. 1932) is considered the father of drag racing. His countless innovations have helped the sport to evolve to what it is today. He was able to engineer a rear-engined dragster which is now commonplace. It had been attempted prior, but he was able to engineer the design and immediately made it competitive. He was the NHRA Top Fuel World Champion in 1975, 1985 and 1986. He was the first driver to surpass the 170, 180, 200, 240, 250 and 270mph barriers.

I actually met Garlits in 1992, and he was super nice. He signed his biography for me.

Big Daddy has a Museum back home (Ocala, FL) It is technically in Bellview FL.