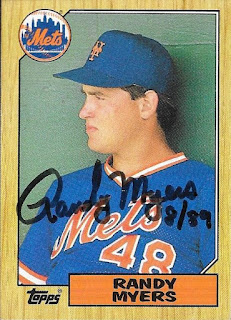 Another of the cards I picked up for myself for Christmas was this Randy Myers signed 1987 Topps.  For some reason, he doesn't sign a whole lot, so I went ahead and picked up with JSA certified auto once I saw it pop up.