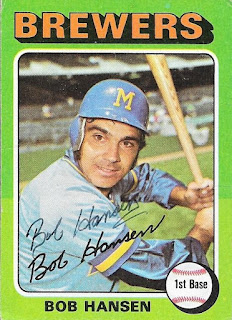 I was able to use one of the few 1975 Topps cards that I have left for another TTM success.  I had gotten a bunch of 75s a while ago from my buddy, Max, and used some of them for a secret Santa around the blogs.  While I enjoy giving folks gifts, I was really disappointed because I never got a thank you for those cards.  I should have saved them and used more of them for TTMs.  That's what happens sometimes when you do something nice for someone; it goes unappreciated.

Anyway, I was able to get this card back signed from Bob Hansen.  I had actually sent him two cards, but he only sent this one back.

I mailed to Hansen on October 23 and got the card back on October 31, for an 8-day TAT.
Posted by William Regenthal at 6:15 PM