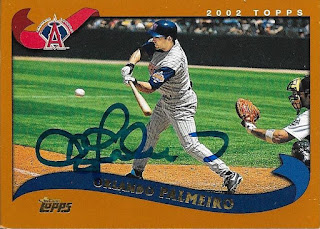 I held this 2002 Topps Orlando Palmeiro card for a while, meaning to send it TTM to him.  My problem was, I knew I could find more of his cards, but for some reason, I didn't have many. 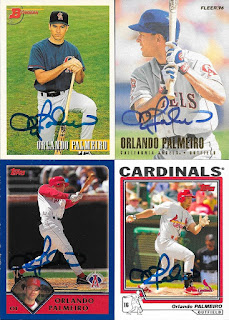 Over time I picked up some boxes of 90s stuff, and ended up with the 1993 Bowman.  I busted my box f 1996 Fleer that was in my closet, and found his card in there, and finally, I picked up the sets of 2003 and 2005 Topps at the LCS that were going to be trashed, and found two of his cards there.

I thought I saw that Palmeiro was cousins with Rafael Palmeiro, but now I can't find anything to back that up.  I'm pretty sure they are cousins.