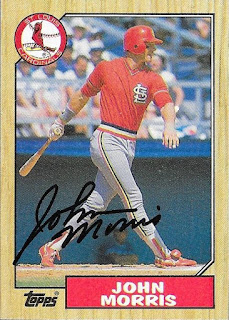 My good friend, Vince, sent me this signed 1987 Topps John Morris for Christmas.  It came in today, and I wanted to go ahead and get it posted and into my 1987 album.

Vince is a great guy, and I was able to have dinner with he and his parents at this past year's National.  I'm hoping I can get up his way next season and do some graphing with him.

Thank you so much for the gift, Vince!
Posted by William Regenthal at 4:59 PM