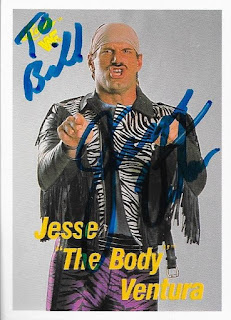 This was another card that I picked up from COMC recently. I saw that Jesse Ventura signed TTM, so I had to send to him. I was so excited to get this back!

Ventura (b. 1951) was the 38th governor of the State of Minnesota. Before that, he was a professional wrestler and actor.

He wrestled from 1974 to 1994 and also was a popular manager and commentator. He appeared in popular movies like Predator and The Running Man.  He surprised the nation when he won the election to become Governor of Minnesota in 1999 and he served until 2003.

I mailed to Ventura on November 4 and got the card back on November 18, for a 14-day TAT.
Posted by William Regenthal at 9:56 PM