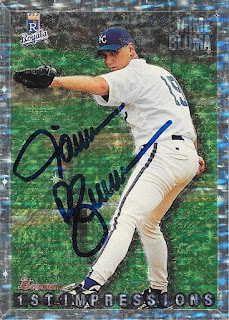 I added some late 90s cards to my autograph album when I received this TTM success back from former pitcher, Jaime Bluma.  I found the cards at my LCS a while back, and finally got around to sending them off.  The above 1995 Bowman First Impressions card looks really cool.  I was a little worried that powdering the card might mess it up, but it turned out pretty well. 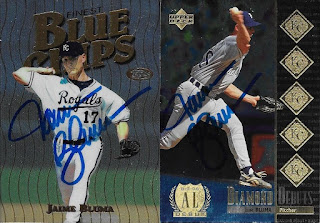 The opps Finest Blue Chips card really turned out great.  It was back when Topps used to put the protective film on the Finest cards.  I removed the film, prepped the card, and it turned out really well.  The Upper Deck Diamond Debuts card is one I don't have many of in my album, so I was glad to add this one. 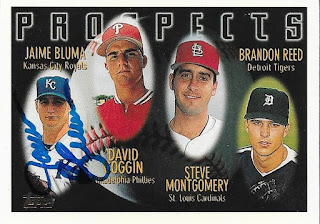 I mailed to Bluma on October 25 and got the cards back on November 8, for a 14-day TAT.
Posted by William Regenthal at 4:25 PM