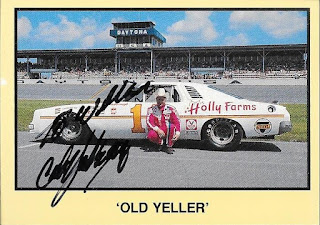 I went on a small buying spree on COMC recently that helped me obtain some cards of non-baseball TTM signers.  I found quite a few folks who were signing, so I went ahead and got a few things that would look cool in my autograph album, and I sent them out.  One such subject was former NASCAR driver, Cale Yarborough.

I actually had a site that I used to go sample for work that was next to where Yarborough lived in South Carolina.  I would see him riding around on his golf cart, but I never got the chance to talk with him.  That might be good, though, because I would probably still be there. 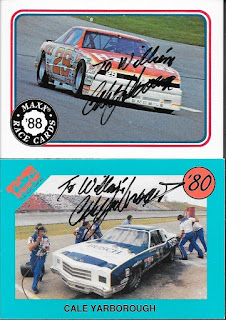 The above 1988 Maxx card actually came from my LCS, and that was what spurred me to search COMC for more cards, because I knew I could find a few Yarborough cards  on there.

I mailed to Yarborough on November 4 and got the cards back on November 14, for a 10-day TAT.
Posted by William Regenthal at 5:11 PM