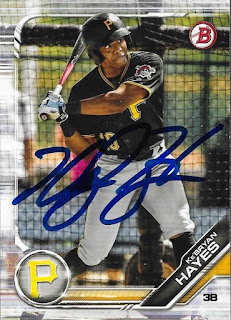 I completed a trade on Instagram with a kid named Drake a few months back.  I really didn't think I would pull the trade off when we first met, because he would comment on my posts about wanting autos that weren't available, culminating with a direct message complaining as such.  I figured that would be the end of the interaction, but a few days later, I got an apology, and we got to talking.

We ended up working out a trade, and carrying on a conversation about graphing the minors, the propsed changes to the system itself, and just life stuff in general.  I was really glad that I didn't overreact to his initial message, and gave the guy another chance. 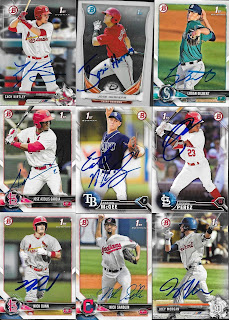 I keep a box of extra autos that I accumulate throughout the season, and use that as "currency" in proposing trades for cards that I need.  I have also had to use some to entice some folks to take a card for me to get signed.  Graphing can be a tough business sometimes.

Still, though, I end up with autos that some folks need, and I am happy to make some trades to get some new stuff into my albums.  Once the cards make it into the albums, they don't get removed (which probably was the source of Drake's frustration).

We ended up going through the box via video messages on Instagram, and settled on a 1 for 1 trade (meaning, for every card I sent, he would send one).  I was happy with the stuff I was able to get.

Anyway, we are friends now, and we plan on doing some 50/50s and consignments for the upcoming season, so I feel like we will continue in a positive direction.
Posted by William Regenthal at 10:44 AM