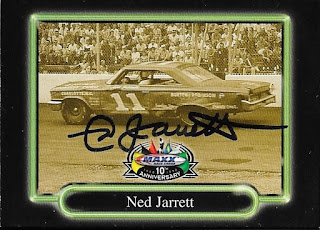 I have his grandson (Zach) on some Delmarva Shorebirds team set cards and his son (Dale) on a Wood Ducks pocket schedule, so it was only natural to try to send some cards to Ned Jarrett when I saw that he was signing TTM.

I went on COMC and picked out some cards that I thought looked cool, and they all came back signed.  I like the ones showing the old race cars.  My mom always liked seeing photos of the racers themselves, but I always liked taking photos of cars and I think that has kind of moved over to the cards as well. 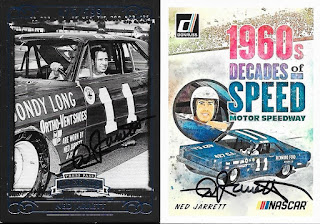 All of these cards are really cool, and I didn't pay a whole lot.

Jarrett (b. 1932) ran in NASCAR's Cup series from 1953 to 1966, amassing 50 wins and 2 series championships (1961 and 1965).  He once won a race (the 1965 Southern 500 in Darlington) by a margin of 14 laps and 2 car lengths, or a total of 19.25 miles.  This is still the largest margin of victory in NASCAR history, in terms of miles.  Jarrett retired in 1966 when Ford announced they were pulling out of NASCAR.  He is still the only driver to retire as the Champion.  He went on to be a popular broadcaster for NASCAR following his retirement from racing.  He was elected to the NASCAR Hall of Fame in the second class of inductees in 2011.

I mailed to Jarrett on November 4 and got the cards back on November 30, for a 26-day TAT.
Posted by William Regenthal at 12:35 PM