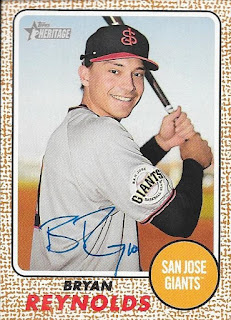 I meant to post this TTM success from Bryan Reynolds yesterday, but I was very busy, so it got pushed back to today.

I was able to get a few cards out of my prospects box and have them signed, and they really turned out well. 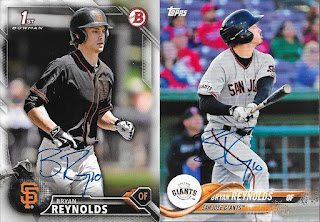 Reynolds signed everything with a thin blue Sharpie, and the cards look great.

Reynolds (b. 1995) was a second round pick in the 2016 June Amateur Draft by the Giants.  He made his major league debut this past april and played 134 games for the Pirates.  He finished 4th in the NL MVP voting after collecting 154 hits, 16 home runs and a .314 batting average.

I mailed to Reynolds on November 25 and got the cards back on December 14, for a 19-day TAT.
Posted by William Regenthal at 6:44 PM