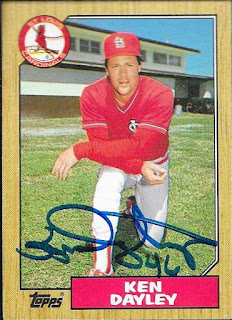 Blog reader, Ray, hooked me up again with a signed 1987 Topps that I needed for my set, Ken Dayley.  I actually had sent TTM to Dayley several months ago, but the cards still haven't come back, so I was happy to see Ray's email in my inbox saying he could get Dayley for me.

Thanks so much for getting the card signed for me, Ray!
Posted by William Regenthal at 8:00 PM

You are most welcome. Hope to see you complete this massive set one day.