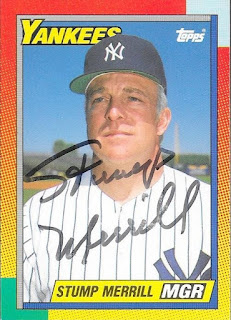 I got this card among several boxes from the Goodwill near my parents' house a while back.  Every now and then, they have baseball cards, and Mom made sure to let me know when I was in town one time that these were there.  The boxes were a bunch of Topps Traded sets (busted, with key cards removed) and some other alternative sets like Donruss Highlights, The Rookies, etc.  So, since the sets had been busted, I broke some of them up even further and sent out a few TTMs.

I mailed to Merrill on October 28 and got the card back signed on November 30, for a 33-day TAT.
Posted by William Regenthal at 10:44 AM