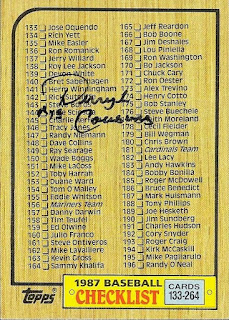 I used up another 1987 Topps checklist recently when I sent TTM to former umpire, Derryl Cousins.  I wanted to add some of the umpires to my set, so if the slot for the checklist is already full, I will add this one to the back of the binder.  I plan on adding some other, different, stuff to my binder via the hundreds of checklists that I ended up with.  We'll see if I can make that happen.

I also had these ad and promo cards put aside for some reason, so I included them with the TTM request to Cousins.  I figured getting an umpire on these would be fine.  Now, these oddball ad cards will have a place in my album, as well.

I mailed to Cousins on October 28 and got the cards back on November 25, for a 28-day TAT.
Posted by William Regenthal at 5:45 PM