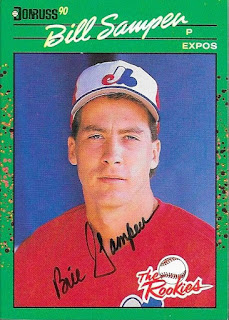 I added some cards to my autograph album that came out of the Goodwill boxes I picked up a while back.  This TTM success from Bill Sampen helped me get a couple cards out of those boxes.  These are some cool smaller set cards that look nice, when compared to their main set counterparts.

I'm one of the few people that I know who liked the 1990 Donruss design.  I thought it was really cool when I discovered the green and blue versions of that set (green being The Rookies set, and blue being the Donruss Stars set).  There may be other versions of this design, but those two subsets are the ones I am aware of.  I know Panini brought back the design a couple years ago, and it looked great.

Of those Goodwill boxes, I also had Sampen sign a 1990 Topps Traded (far left).  The 1991 and 1992 Topps came out of my Topps boxes, and I am never unhappy to take cards out of those boxes.

I mailed to Sampen on December 3 and got the cards back on December 12, for a 9-day TAT.
Posted by William Regenthal at 6:04 PM