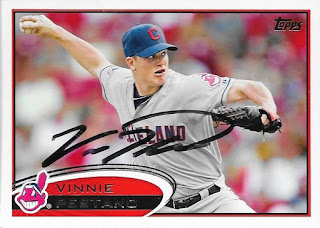 When I saw that there were players who played fairly recently who were signing TTM, Vinnie Pestano was one of the first ones I started pulling cards of.  He didn't have much, but I did find a few in my boxes. 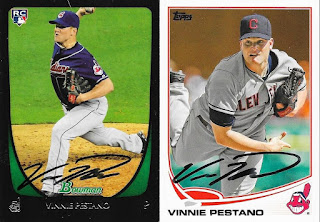 Pestano signed the three cards I sent with a black Sharpie, and the signature turned out really well.  I especially liked the 2011 Bowman.

I mailed to Pestano on October 21 and got the cards back on November 30, for a 40-day TAT.
Posted by William Regenthal at 10:39 PM