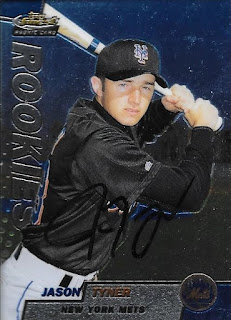 I added some nice cards to my autograph album with this TTM success from Jason Tyner.  I found a few of them at my LCS, and a couple others were ones from my boxes here at the house.  The above 1999 Finest looks a lot better in person.  I found it at the LCS.  It was one of those types of cards that used to have the protective film over it, that had to be removed.  I prepped it with powder, and it turned out pretty well.

I mailed to Tyner on October 14 and got the cards back on December 9, for a 56-day TAT.
Posted by William Regenthal at 5:19 PM