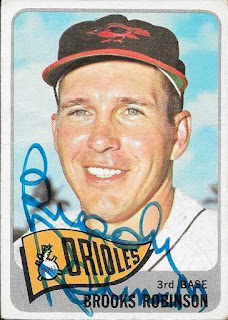 My good friend, Jackson, sent me this awesome Christmas gift that included the above signed Brooks Robinson 1965 Topps.

1965 is one of my favorite sets, and I was glad to be able to put this Brooks in my autograph album. 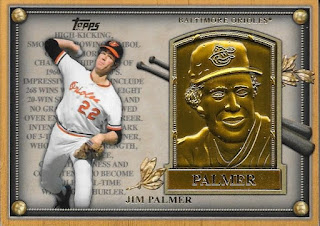 Jackson included this Jim Palmer Hall of Fame plaque card, which I had never seen before.  If The Orioles hadn't canceled Fan Fest, I would put this at the top of my list of cards that I would want to get signed.  Unfortunately, I won't be able to for the time being, but might give it a shot later this summer. 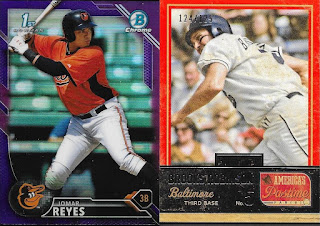 Finally, Jackson included these two cards in the package.  I might see Jomar Reyes this summer, and I can always use new Brooks cards.

Thank you so much for the package, Jackson!
Posted by William Regenthal at 5:38 PM