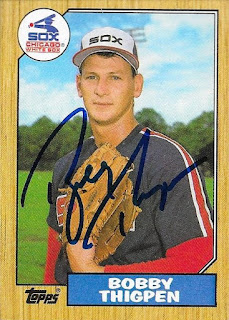 Thigpen used to be the pitching coach of the Winston-Salem Dash, but that was back before I was graphing much at minor league games.

I mailed to the private signing on November 6 and got the card back on December 2, for a 26-day TAT.
Posted by William Regenthal at 5:23 PM