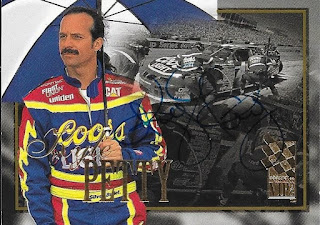 You have to look really closely, but this card is signed by Kyle Petty.  I believe I had actually met him way back when I was working at the Harris-Teeter in Huntersville.  Rusty Wallace used to shop at that store, and I'm sure Joe Gibbs did, as well, since his shop was nearby.  I remember a guy who looked just like Petty came up to the customer service counter and chatted with me for a while, as the folks he was with were shopping.  He was really friendly, asked me about where I was going to school, how long I had been working there, etc.  After he left, one of the guys who worked in the deli asked me if I knew I had been talking to.  I said "I think that might have been Kyle Petty."  He said "Yes, it was."  It was just a cool moment that I had for 15 minutes at a store I really enjoyed working at.  Even if it wasn't really Petty, I'd like to continue to believe it was.