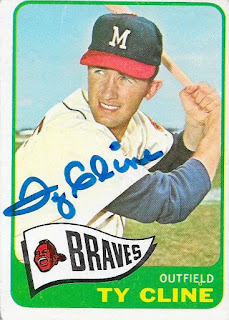 I haven't added very many 60s cards to my autograph album lately, as I have been focusing on my 87 set, and getting some other years represented (namely 80s and late 00s stuff).  Still, the occasional 1960s card will come in, as did this 1965 of Ty Cline.

I love the 1965 set.  It is a really great set that I likely will take up building sooner than later.

I mailed to Cline on October 3 and got the card back on October 11, for an 8-day TAT.
Posted by William Regenthal at 8:30 AM