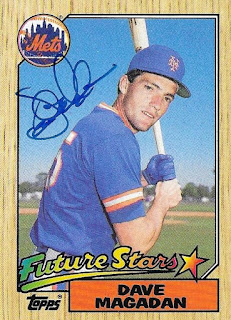 I knocked off several 1987 Topps recently when I took part in a few private signings on SCN.  There were a bunch back to back to back, so I had to expand the budget a bit, but I was able to get a couple tough guys off of my checklist and into my binder.

I had sent TTM to Dave Magadan in the season, since he is a hitting coach somewhere.  I never did get those cards back, so I went ahead and sent to the signing and am happy with the card.