Another TTM Success From Jay Bell 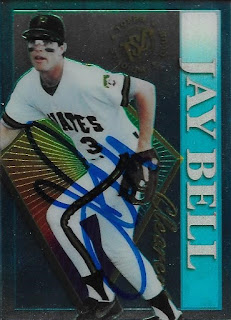 I had found quite a few Jay Bell cards while looking through boxes during several trips to the LCS and while at the National.  The above 1995 Stadium Club acetate card was just too cool to not send TTM.  I found that one in a dime box at the National. 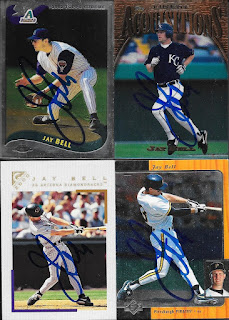 Since Bell signs a bunch of cards when you send to him, I grabbed these from the LCS and sent them with the acetate card.  All of them turned out great.

The 2000 Topps Gallery (bottom left) is yet another set that I missed out on when I was in college and not collecting cards.  I found a stack of them at the LCS, so I grabbed a couple of some guys that I knew signed TTM.  While I was at the shop picking up the 2002 Chrome, the clerk sold me sets of 2002, 2003 and 2004 Topps that had been in storage for a while.  I was lucky enough that they weren't all stuck together, and got them for a great price.  Some of those cards will pop up in some later TTM posts.

Awesome! Those are some sweet TTMs. Would you mind messaging me his address so I can send to him? I’m currently working on a 2001 WS champs auto project.