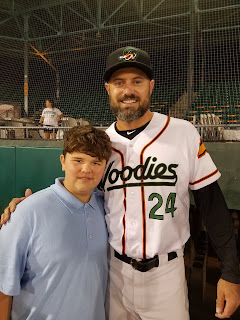 I just learned a couple minutes ago that Corey Ragsdale would not be returning as the Wood Ducks manager for the 2020 season.  While I am really sad to hear this, I am super excited because he has been promoted to the Rangers MLB staff as their MLB field coordinator.

I knew something like this was coming.  All Rags did this season was impress me on how he managed the Wood Ducks and also continued his other job as Rangers Minor League Field Coordinator.

The Minor League Field Coordinator is the person who determines where each minor league player is assigned, who moves up (or down), etc.  He also made sure my beard was up to par this season.

At the final regular season home game, Rags hugged Chris and I and thanked us for coming out this season.  I told him that it was my first season as a season ticket holder, and he was probably the biggest reason why I would be renewing my package.

I had also ran into him outside the stadium a few games before where, during the game, he had been ejected.  He went so far as seemingly apologizing to Chris and I for being ejected.  Rags is just a great guy.  I really hope that we can run into him in the future, as he may be one of my most favorite people I have come across in all of the MiLB games that I have gone to.  I can easily say that Chris and I love Rags.

I'll also miss saying this before every game, "Go get em, Rags!"
Posted by William Regenthal at 5:40 PM