Another TTM Success From Jim Barr 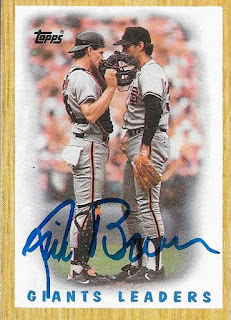 I had been told in the past that Jim Gott was on the 1987 Topps Giants leaders card, so a friend of mine had gotten one signed by Gott in Arizona this past summer.  When I posted the card, I was told that it wasn't actually Gott on the card, but Jim Barr.

I had gotten Barr TTM back in 2017, and had no idea he was on the 87, so that card got left out.  Thankfully, I had another, so I sent it off.  It came back signed and now I just need to get Bob Brenly.

I mailed to Barr on October 15 and got the card back on October 4, for a 9-day TAT.
Posted by William Regenthal at 7:20 AM