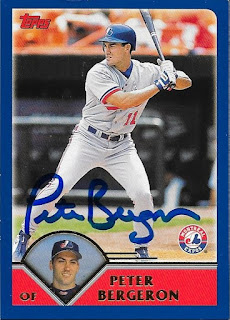 I added some more early 2000s cards to my album when I got this TTM success back from Peter Bergeron.  I had purchased some partial sets from my LCS that they were just going to toss in the recycling bin, and I ended up getting some good TTM subjects from the boxes. 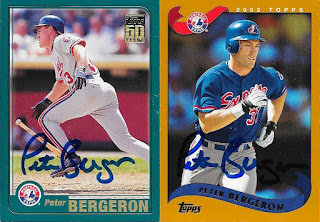 I had the 2001 Topps already, and the 2002 and 2003 came from the LCS.  They had made a huge purchase of someone's collection.  In the collection was a lot of 2002, 2003 and 2004 Topps factory sets.  A lot of them were fused together from the super gloss, so the shop was just going to trash them.  I talked him into letting me have a couple, and the cards turned out to be in really good shape.  I kind of wish I had saved some more of the sets from the recycle bin.  Bergeron was one of the many players I found in the boxes that I could send TTM.

I mailed to Bergeron on October 16 and got the cards back on October 29, for a 13-day TAT.
Posted by William Regenthal at 9:49 AM