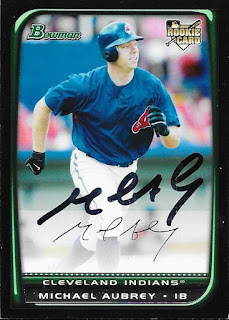 I was able to move some late 2000s cards out of my boxes with this TTM success from Michael Aubrey.  These are cards that I have had floating around in my boxes for over 10 years, and I was kind of getting tired of seeing them.  When I saw that Aubrey was signing, I was glad to get a few of these moving, and they all turned out great.  I don't have very many signed 2008 Bowman (above), but Aubrey did a great job matching the facsimile auto that is on the card. 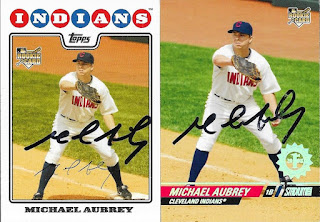 I mailed to Aubrey on September 30 and got the cards back on October 12, for a 12-day TAT.
Posted by William Regenthal at 5:58 PM