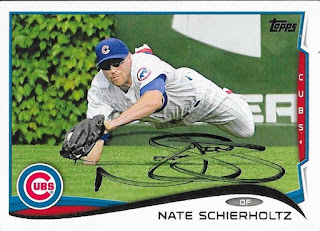 I got a different card back than what I sent, but I did get a TTM success from Nate Schierholtz recently.  He also signed the card with a dead Sharpie, but it is still signed.  I was more disappointed in the signature itself than my card being switched out, but I do like the photo on this 2014 Topps.  The card I sent was a 2014 Topps red foil parallel, so I at least got a similar card back.  Still, the red foil would have looked a lot better; even with the dead Sharpie.

I mailed to Schierholtz on September 20 and got the card back on October 12, for a 12-day TAT.
Posted by William Regenthal at 6:28 PM

Very beautiful post. Thanks for sharing.
How to Embark Upon a Blog for SEO