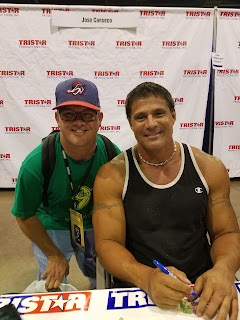 I still don't have much of a plan on how I want to present my pickups from the National, but right now, I want to knock out some stuff from some of the free signers.  The first free VIP signer was the biggest name on the list, Jose Canseco.

Love him or hate him, Jose was the man back in the mid-to-late 1980s.  He was the superstar of that era, and we all now know why his numbers were so huge back then.  He was an admitted steroid user, and burst the steroid bubble when his book Juiced was released in 2005.  I think Canseco was blackballed after his book came out, and have heard lots of horror stories about him concerning other aspects of his personal life.  However, I checked any judgement at the door when I met him, and have to say, he was a really nice guy. 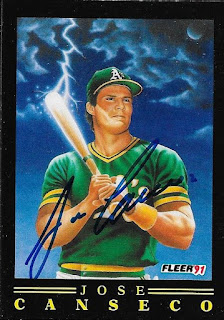 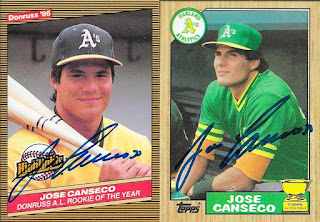 The second time I got in line, I overheard a lady saying she wasn't going to get anything signed; she just wanted to say hello to Jose.  So, I asked her if she would mind getting the 1986 Donruss Highlights card signed, and she kindly did so.  She is also the person who took the photo of Jose and I together.  Later on at the show, I saw that she worked for a card company, so I made sure to but some product from her as a form of thanks.