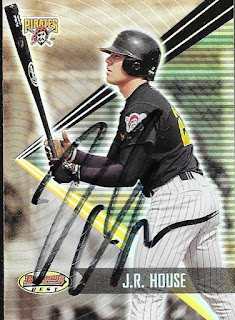 My plan is to catch up on some of my 2017 National Card Show pickups once I get a little free time in the evenings.  Lately, I have been really busy, and haven't had time to sit down and scan more of the cards that I got at the show.  In the meantime, I am going to keep trying to get ahead on my TTMs, but even that has fallen behind.  I'll get there when I get there, I guess.

Luckily, I have been getting in some successes, even though I haven't sent out much lately.  I did get another book of stamps, so I can try to get some stuff in the mail soon.

I got these cards in from JR House recently, the best one being the above 2001 Bowman's Best.  I got this out of a box at my LCS, and it turned out nicely.  He used an old sharpie for the signature, but in the end, it turned out ok. 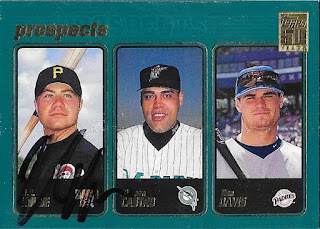 I also got this 2001 Topps signed by House.  I doubt I will pursue the other two guys, but you never know.  I may give it a shot down the road.