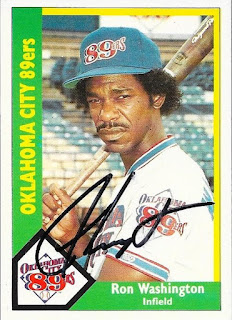 This was a TTM success that got me pretty excited when it came in.  I had a few cool cards of former Rangers manager, Ron Washington, and they all came back looking great.  This 1990 CMC AAA was one of the minor league cards that came out of a show box from Mom's attic.  I'm glad to be able to use some of those obscure minor league cards, and this one of Washington looked really cool. 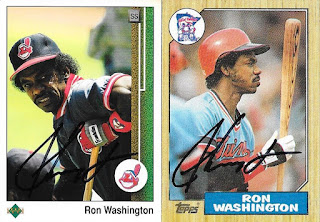 I had to add a 1987 Topps to the album, and I don't have many 1989 Upper Deck for whatever reason.  Both of them turned out really nice, as well.

I mailed to Washington on June 12 and got the cards back on August 12, for a 61-day TAT.  I sent via the Braves at SunTrust Park.
Posted by William Regenthal at 6:19 PM