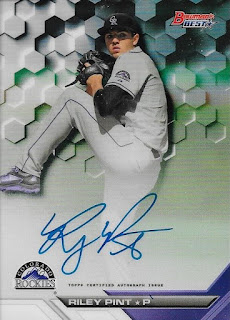 One of my favorite things from this year's National was that a fellow Instagrammer hosted trade nights at a neighboring hotel for a couple nights after the show.  We made it to trade night for Friday and Saturday nights.  At the trade nights, I was able to pick up a couple nice Trey Mancini autos from a couple folks that I'll show with the rest of the Mancini suff that I picked up.  I also was able to purchase two different Bowman's Best Riley Pint autos from a guy named Phil.  He had the Pint cards because he used to play against him in local ball, but was ok with letting them go for cheap. 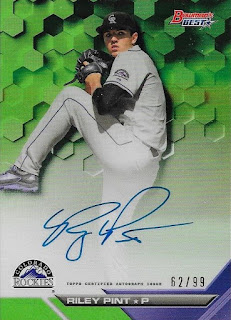 I believe I picked up both Pint autos for a total of $30.  I was really happy with that, and will likely hold onto both of them as I follow Pint's career.  I have shuttered my Sonny Gray side PC, since he is a Yankee now, and am likely to sell off all of those cards.  It will be nice to transition to another player who isn't an Oriole.  It also helps that I have met Pint in person. 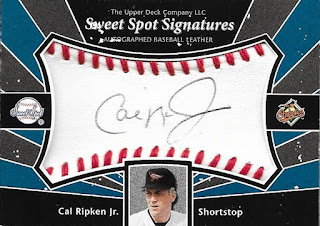 Another fellow Instagrammer made a point to seek me out at the trade night and work up a deal for me to land this Cal Ripken auto from Upper Deck Sweet Spot.  This is a rare Sweet Spot auto that didn't fade all to crap, but the surface of the card itself is pretty jacked up.  The trader (TimHudsonfan) made a great deal with Max for the card, and I then bought the card off of Max for cheap. 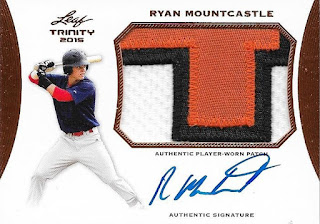 Remember the lady I spoke about who helped me with Ron Davis?  Well, I had told her about the trade nights, and her and her boys showed up on Saturday.  It turned out that her oldest son was someone I traded with on Instagram back when I was first getting started.  We worked out a deal for another Trey Mancini auto, along with this Mountcastle patch auto.  We also discussed a future 50/50 since both of the boys are Indians fans and I will be seeing Lynchburg soon. 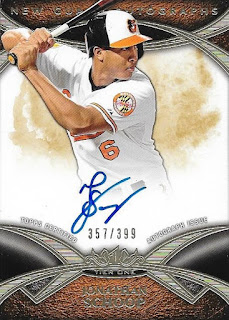 I also met a fellow Instagrammer (santiagosportscards) who has been following me for a long time.  We discussed an orange parallel that I had gotten out of my box of Pro Debut.  I was just going to give it to him, but he insisted I take this Jonathan Schoop auto, as well.  He also had a gold refractor auto Schoop from 2014 Topps Chrome.  I almost walked out of the trade night with that card, but he said he didn't really want to sell it.  So, I told him that he should keep the card, but let me know if he ever wanted to move it. 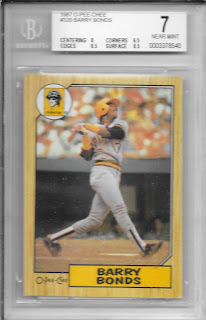 Finally, I got this graded 1987 O Pee Chee Barry Bonds RC as a throw in to one of the deals that I made at the trade night.  I can't remember who I got it from, but I figured I would pick it up since it was a nice RC that I didn't have.  Also, since it was a throw in, I couldn't argue about the price!

So, I know that if I go next year, I will definitely make time for the trade nights, if they are being hosted.  I had a great time and left with some really cool stuff!
Posted by William Regenthal at 5:46 PM