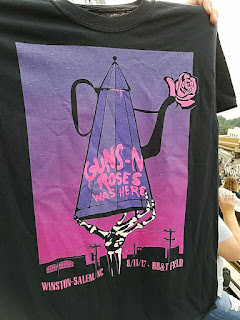 I had to borrow a line from another artist's song to tie everything together for a nice title of this post, but it fits in with the whole narrative from last night.  I went to the Guns N Roses concert in Winston-Salem, NC last night with my son, wife and brother.  This was the culmination of a lifetime of waiting and hoping to be able to have this moment. 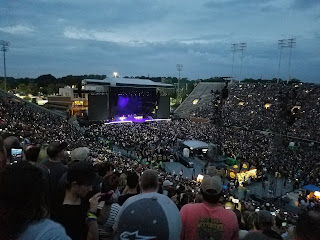 I had taken my little brother, Andy, to see Guns N Roses in November 2006, just before his 11th birthday.  At that concert, I had told Andy that if GNR ever came back to NC, I would take him.  That was a great show and all, but it was the Guns N Roses lineup that was pretty much just Axl and friends.  When we found out that Slash and Duff had rejoined the band, Andy and I hoped that the right and true lineup would go back on tour and come relatively close to us.  What ended up happening was that they did go on tour, and announced that they would be coming to Winston-Salem, of all places. 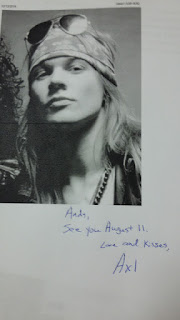 I had a little bit of fun in telling Andy that I had gotten him tickets.  I used it as his birthday and Christmas presents this past year, and wrote the above note "from Axl".  I took the pic of the note before I added XOXO at the end of it, since I couldn't miss the opportunity to reference Joe Dirt.  Andy appreciated the joke. 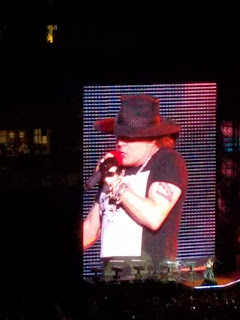 The band, Live, opened the show with a short set and brought me to tears with a cover of Audioslave's "I am the Highway", saying that "it was one of the many gifts that Chris Cornell left the world..."  I was in tears.

Axl and company hit the stage just after 8:30 and rattled off song after song for almost 3 hours. 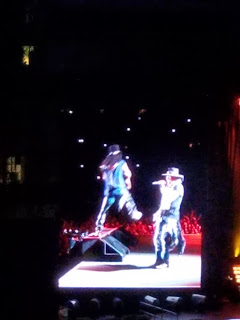 GNR has carrried a stigma in the past of no showing concerts or going on stage very late.  That wasn't the case last night.  They really brought it, and the crowd was amped the entire time. 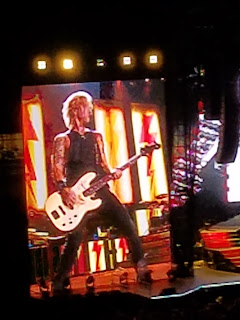 I noticed a lot of little things in the set, like some riffs borrowed from other songs during some of the solos.  I also noticed the Prince logo on Duff's bass guitar. 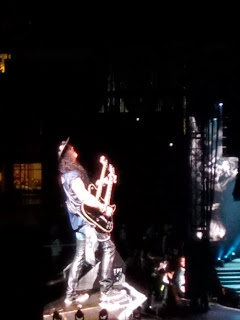 It was pretty amazing seeing Slash break out the double guitar.  I don't believe I have seen anyone play one of these live. 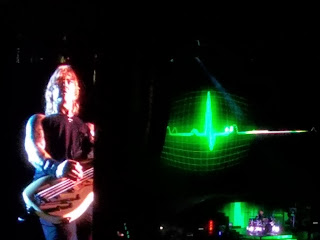 They busted out a super duper deep cut just for me, it seems when they played Coma.  This song was one of (and still is) my favorites when I was growing up, and to hear it live was amazing. 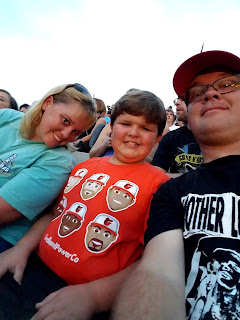 I was happy to be able to share the experience with Mal and Chris, since this is one of the penultimate bands from my childhood.  I used to listen to Side 2 of the Use Your Illusion I cassette tape every night to fall asleep.  November Rain is probably one of my all-time favorite songs, and to finally hear it live with Slash playing the solos instead of some stand-in, it was pretty magical. 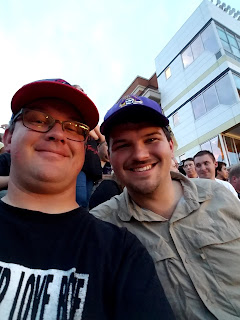 I turned to Andy during November Rain and told him "We have been waiting our whole lives for this moment."  This is very true.  We all have songs that are part of the very fabric of our being, and for me, a good many of those are Guns N Roses songs.  This band was "my band" when I was growing up.  Folks who know me know that I am a huge Pearl Jam fan, but GNR has always been at the very top for me for a lot longer than PJ has.  Not to take a thing away from Eddie and the crew, but there was always the fear that I would never be able to experience the true GNR live experience.  Thankfully, I was able to do so last night.
Another part of the show that I will always remember is that it was the culmination of a very emotional experience for me that began on the morning of May 18, 2017.  I woke up that morning at my friend, Andrew's house, and saw a text message from my wife that said "Chris Cornell died."

Being the huge Pearl Jam fan that I am, I grew to love and appreciate the talent that was Cornell's.  I remarked on too many occasions to count that Cornell had to be one of the most talented musicians that I had ever seen in my lifetime.  It took Audioslave to hammer that point home for me, but ever since Out of Exile came out, I understood Cornell's immense talent, and began to really appreciate his work with Soundgarden, and also his solo work.

If you ask my brother, Adam, he can tell you that there was once a time where I hated the song, Black Hole Sun.  He used to wake me up in the morning to Tupac, Bone Thugz N Harmony, and would sometimes change things up with BHS.  I didn't like any kind of music blasting at 5:59AM, so I can give myself a pass on my initial take of the song.

I can't think of any other celebrity death that has hit me harder than that of Cornell's.  In the months that have followed his suicide, I have been listening to a bunch of his songs on YouTube, especially his cover of Prince's "Nothing Compares 2 U" and the touching "I Promise This is Not Goodbye."

Live's version of "I am the Highway" last night brought me to tears, but when Dizzy Reed went into a piano riff of "Black Hole Sun" during GNR's set last night, I bawled.  Axl once went on record to express his respect to Chris Cornell back in the early 90s, and Duff recently took the stage with Cornell in a tribute concert for the supergroup, Mad Season (look this concert up, it was amazing - Sonic Evolution).  The respect that the music industry has/had for Cornell is mind blowing. Check out some of the many tributes from other artists to Cornell, starting with Norah Jones's version of Black Hole Sun.

So, what was already an emotional experience for me in seeing one of my favorite all-time bands, and then seeing this live tribute to Chris Cornell in person, really capped my night.  I believe this was probably in the top two or three all-time concerts I have been to, and by my rough count, I think this was number 28.

When I say "No One Sings Like You Anymore", I am saying that no one will ever sing like Chris Cornell anymore, but I also mean that there are very few huge acts that will put on the kind of show like GNR did last night.  All of these arena rock bands are slowly dying out, or retiring.  Andy and I couldn't name too many that are still touring that we will be able to see in the future.  There also aren't very many new bands that I see coming along that I would want to see in a huge venue.  I'll have to stick to Pearl Jam when they go back on tour, I suppose.
Posted by William Regenthal at 10:00 PM