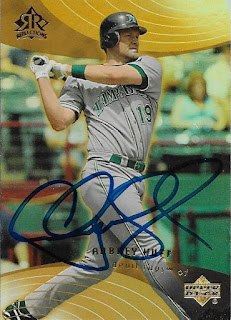 I was really excited to get this TTM success back from former Oriole, Aubrey Huff.  Mainly because I knew he would be a tough sign, but also because I had a shot to get this 2005 UD Reflections back.  I sent two other cards, but Huff only signed one.  I was on the fence about wanting one of his Orioles cards back, but in the end, I am happy with this one.