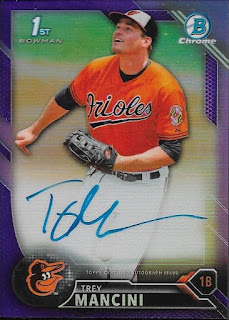 I realized when I got home from the National, I picked up a bunch of Trey Mancini autos!  I got most of them really cheap, with the exceptionof this 2016 Bowman purple refractor auto and the below graded 9.5 10 refractor auto.  I bought these two cards as "investments" and plan on getting the purple graded.  It is numbered 211/250 and should get a pretty decent grade. 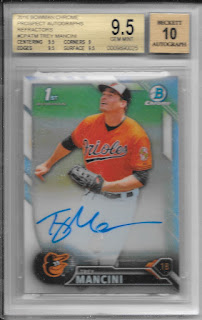 This graded refractor auto is a pretty cool card.  I had some help in picking it up, as Anthony and Max showed this and the purple to me.  I made a deal for the both of them, and saved a good bit of money. 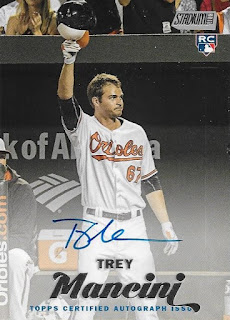 I got this 2017 Stadium Club auto from a guy named Parker at the Saturday trade night.  I traded him my Gleyber Torres Pro Debut red parallel numbered to 10 for this and $20. 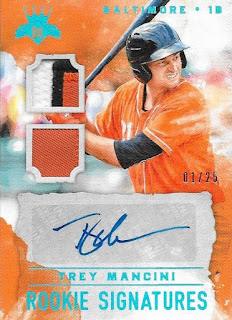 I made a bulk deal for this 1/25 Mancini dual patch auto from Diamond Kings.  I got a nice discount on the whole lot that I purchased, but this card was the key to the deal. 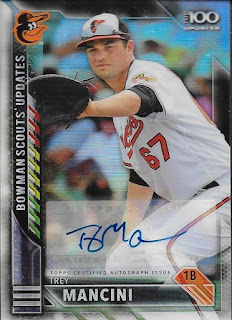 I traded my Royce Lewis relic/auto to a kid named Griffin for this Mancini Bowman auto.  He is a Twins fan, so he was really excited to pick up the Lewis. 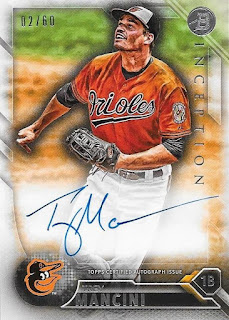 This was one of the last cards I picked up at the show.  I randomly asked a guy if he had any Mancini stuff, and he said that he had the "Bowmanized" inception for a great price.  I think this card looks so cool, so I picked it up. 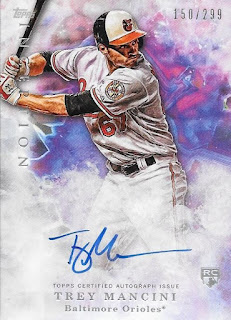 Finally, this was my first purchase at the entire show.  I got this from a fellow Orioles fan, so I paid a bit of a premium for it, but I finally had an Inception auto from this year, after getting shut out on a few on Ebay.
Posted by William Regenthal at 9:28 PM