A Few IP Autos From Friends 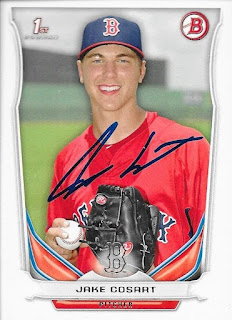 Right before I left for the National, I received care packages from a few friends that included some 50/50s that I had requested beforehand.  I keep getting nice stuff from my good friend, Gerard, and he hooked me up with this 2014 Bowman of Jake Cosart that he was able to get signed for me.  He has a ton of other stuff for me, but has been working on getting it signed over the last few weeks.  Gerard says he will really knock some of my 50/50 stuff out over the next week or so, so I'm really excited about that. 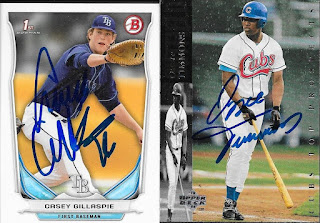 My buddy Dugan also has a stack of Mudcats that he was able to get done for me on July 4.  In the meantime, he sent me these two cards of guys he was able to get at the Durham Bulls last month.  I already had Timmons, and I really meant for Dugan to keep these cards for himself, but I appreciate the autos nonetheless. 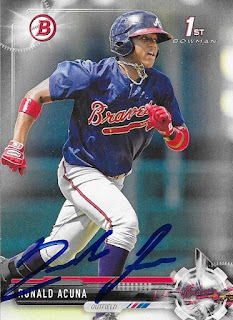 Finally, I traded my good buddy Andrew an Eloy Jimenez auto for this Ronald Acuna that he was able to get earlier this summer.

I actually have a bunch more autos from Andrew that he handed me at the National, but I need to get those scanned first.  That will take me some time.

Stay tuned for more National stuff.  I was busy today writing TTMs and preparing for graphing for this upcoming week, but I plan on getting some stuff scanned and posted shortly.  Thanks for your patience.
Posted by William Regenthal at 10:52 PM