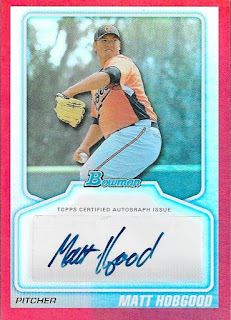 I've said several times how I am way behind on posts.  This card was picked up while I was visiting card shops with Andrew back in May.  The shop where I found this one had two older guys sitting behind a counter talking baseball; just the way I want to spend my retirement.  We enjoyed our chat with the guys, so I felt compelled to buy something from them, even though there wasn't a lot to their shop.  When I saw this red 2010 Bowman Matt Hobgood auto, I had to pick it up.  The card is numbered 1/50.

I hadn't added anything to the Hobgood PC in a long time.  He was a bust as far as 4th overall picks go, but every time I talked with him, he was super nice.  Just a really good kid who was plagued by shoulder issues.  I really wish he could have taken off as a prospect, but it just wasn't meant to be.  This is probably why I'm not a scout.  I would have too much of an emotional investment in a player based on their personality; I would have a hard time telling them that their time is done as a prospect.  Oh well.  From everything that I have seen, Matt is enjoying life and is doing well.  That's all that really matter in the end, anyway, right?
Posted by William Regenthal at 10:00 AM