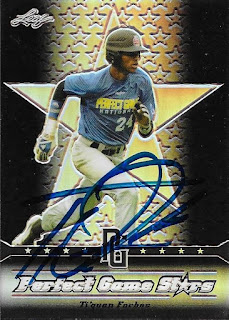 Chris and I took in a game (along with one of Chris's friends) between the Wood Ducks and Blue Rocks last week.  We were able to do a good bit of graphing that was the culmination of the dime box finds from the National.

The above Ti-Quan Forbes was a box topper from one of the boxes of 2013 Perfect Game.  The card turned out really nice. 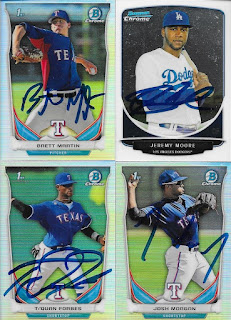 These are Bowman Chrome minis that I found in a dime box at the show.  That seller had boxes of Bowman dating back as far as 2006, I believe. 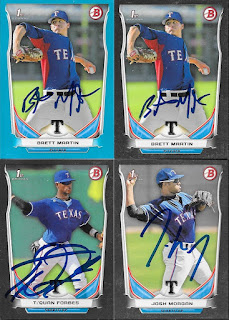 They also had a ton of 2014 Bowman blue and black parallels.  I stocked up on the black parallels of a bunch of guys that I knew I would see this month. 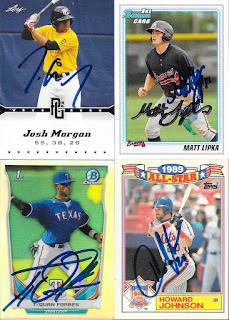 I pulled two Josh Morgan cards out of my Perfect Game boxes.  I also found four Matt Lipka 1st Bowman Cards.  He was nice enough to sign all four at this game, and we also talked about how young he was in the picture. 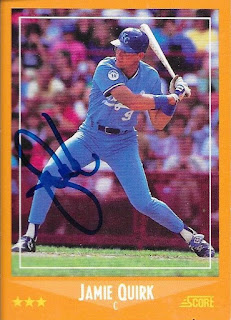 I was able to get a few more Jamie Quirk cards signed.  Chris actually got to go out on the field and present the lineup cards to Quirk and the umpires.  He was invited out there by Jeremy Moore, which was a really cool moment, 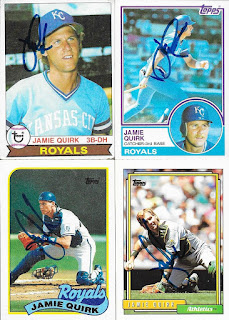 I added some new Topps cards to my binder, thanks to Quirk. 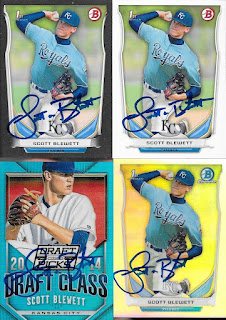 I had some nice parallels of Scott Blewett as well.  They turned out really nice.  I also had a bunch of Chase Vallot, but he was on the DL and didn't make the trip to Kinston. 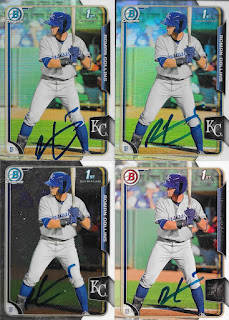 Finally, here are the Roman Collins cards that I got.  I got two refractors, one chrome and a paper base.

Now, I am off to try to get more Mudcats.
Posted by William Regenthal at 5:17 PM