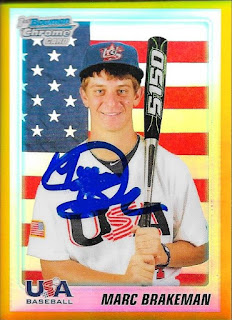 I only saw the Salem Red Sox once this season, and that was at Five County Stadium in Zebulon.  It was the July 4 game against the Mudcats, and I didn't do very well at all trying to graph the Red Sox.  So, I sent what I had left out to my good friend, Dylan, to complete.  His home team is the Red Sox, and he worked on my cards through the rest of the season.

The above 2010 Bowman gold refractor of Marc Brakeman was the one card that I wanted the most, and Dylan came through for me.  This card is numbered 50/50, which is kind of ironic (don't you think?). 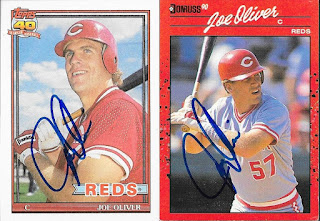 Dylan hooked me up with a couple Joe Oliver cards.  Oliver was one of the few guys who would sign for me at the July 4 game.  Paul Abbott, on the other hand, would not.  Oh well. 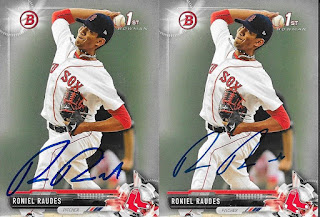 I got these two Roniel Raudes cards back from Dylan.  I have gotten quite a few 2017 Bowman cards signed.  Not that I am working on the set or anything, but they are nice cards to get signed. 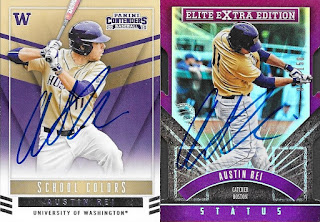 I had picked up a bunch of cards from my LCS for the Salem guys, and was disappointed that I couldn't get any of them done.  Dylan made it a little better for me, especially with these two Austin Rei cards.  Both of them turned out great. 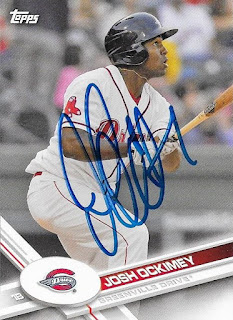 Dylan kept one of my Josh Ockmey cards, which was fine by me.  I was happy to get this Pro Debut back from him, though. 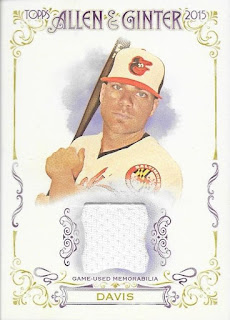 Finally, Dylan included this 2015 Ginter Chris Davis relic for my PC.  I really appreciated that he thought well enough of me to add extras.