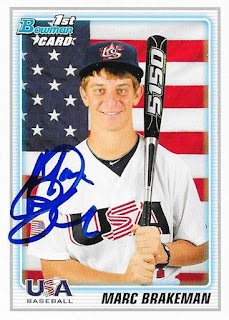 I have been sitting on a stack of 2010 Bowman Team USA cards since the 2012 National was in Baltimore.  I went to that show with my friend, Ryan, and picked up a huge stack of these cards out of a dime box.  I ended up dropping something like a dollar on the entire stack, and put them aside in my rookie box and waited to see if any of the kids made the majors.  The Albert Almora, Alex Bregman and Corey Seager cards are nice to see now, but some of the kids in the set are now in the minors, and some of them come nearby.

Marc Brakeman is with the Salem Red Sox, a Carolina League team that makes only one stop in Kinston, and that was early in the season.  I was afraid I wouldn't see Salem again this year, so I asked my friend, Dylan, if he could 50/50 Brakeman for me.  Dylan's home team is Salem, so he was happy to oblige me.  I now have this and a Cole Billingsley card signed.  I was supposed to get a Bregman from someone who apparently worked out with him, but I no longer talk to that guy (a damaged card from his end in a trade, and some overall rudeness killed that relationship), so I doubt I will complete this set.  Still, it is really cool to finally make use of these cards that have been in my box for 5 years.