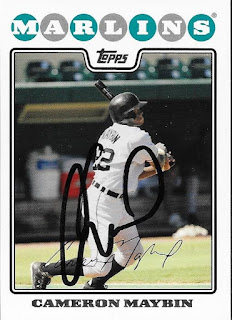 It is really tough for me to know which current players sign TTM, but thankfully, I have seen some successes on Instagram.  Those successes have prompted me to send to a few guys, who I may not have tried before.

I was glad to get this return from Cameron Maybin via the Angels.  I regretted, however, that I sent too soon because I found a great card of him after I had already gotten these back,  I might try him at Spring Training, then, to get that card signed (2016 Topps).  Still, I added a 2008 to the binder, and now this set isn't the rarest in the album. 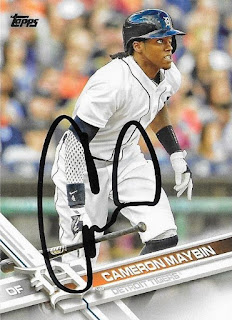 I also added a 2017.  I don't have many of these signed yet, but I think they will start filling in between now and next year's spring training.  They look nice when signed, though.