Graphing in Durham at the Last Minute 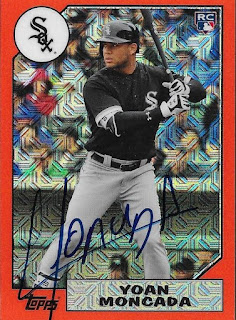 My friend Cameron came into town for the weekend and we decided today that we would hit up a baseball game in the area.  We went to the LCS and picked up a bunch of Durham Bulls cards, since they were the only nearby team that was playing at home today.  As I was getting ready to head out the door, my good friend Brayden messaged me YOAN!  It hit me that the Bulls were playing Charlotte, and Yoan Moncada was on the Knights.  I had just pulled this /99 orange parallel out of my Series 2 silver packs and had been begging Brayden to get his buddy Moncada to sign it for me.

Brayden is a great guy, but he is also realistic.  He lives in Texas, and isn't sure when he will be able to see Moncada again, so I was feeling like I might not be able to get this awesome card signed.  Thankfully, Brayden sent me a jolt to remind me, and I set about my mission to get Moncada on this card.

Cameron and I watched along the 1 hour and 45 minute drive to Durham that the sky was getting darker and darker.  Finally, as we got to the stadium, it began to rain.  We waited by the visiting dugout, then it started pouring.  We moved from our spot to one beneath the roof and waited for the rain to subside.  When it got to a point where I didn't feel like the rain would be an issue, I went back to my post by the visiting dugout.  Luckily, due to the rain, the other graphers had moved out, and I had a prime position to be able to get Moncada, should the game be played, and should he choose to sign.

Then the power went out at the stadium.  We waited and waited, as other graphers finally came and stood nearby.  I looked across the field and saw that the Bulls had already filled their dugout.  One of the graphers (a rare lady-grapher) was kind enough to tell me she would hold my spot by the dugout if I went to try to get a few Bulls.  I walked over and tried for a few minutes, but none of the players were coming over, so I went back to my spot.  I summoned Cameron over (he had continued to stay under the shelter) and recruited the poor guy to try to get a few Bulls for me while I tried to get Moncada.  Cameron tried valiantly, but he was unable to get any Bulls autos.  I'll have to 50/50 those cards with Dilan or Dugan.

Finally, Moncada came out and I was the first person he signed for.  I had two cards, but he was one per.  I was ok with that, because the one he signed was my Orange.  It looks awesome!  I thank Brayden for reminding me that I would have a shot at Moncada, and believing in me that I could get the job done.  I tried to get a card signed for him, but since Moncada is one per, I was unable to.

We ended up leaving the game early, since the Bulls were up 10-0 on the Knights, and the game had been delayed at the start.  We ran into more rain as we were driving home, so this proved to be a wise move.  The Bulls ended up routing the Knights, 17-3.
Posted by William Regenthal at 12:19 AM