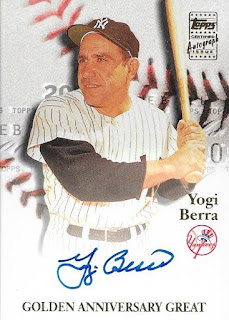 While I was visiting my good friend, Andrew, last week, he and I met a guy in his area who did a lot of selling of baseball cards on Ebay.  During our meeting with the guy, he pulled out a tub of a bunch of late 90s-early 2000s wax boxes.  He ended up giving each of us a few of the boxes.  One of the boxes that he gave me was a 2001 Topps box.  While busting the box, I hit this Yogi Berra on-card auto.  This is probably the best possible hit I could have gotten out of that box.  The back of the card was slightly damaged due to sticking to the rest of the cards, but you can hardly tell.  The front looks great.

I have already had folks ask me for the card, but I want to keep it since I like Yogi a lot.  I just think it is really awesome that I hit this card in a free box that was given to me while I was on vacation.  Who knew that I would hit something so awesome.
Posted by William Regenthal at 6:00 PM