Graphing The Wood Ducks Vs. The Blue Rocks 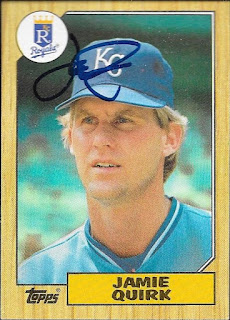 I went to the Down East Wood Ducks vs. the Wilmington Blue Rocks game last night with my son, Chris and got some graphing done.  I was on a mission to get a 1989 Fleer signed by Jamie Quirk and to finish up on some 50/50s for Dugan and Gerard.  I finished Gerard's, but still have a few guys remaining for Dugan.

I added another 1987 Topps to my autograph binder, with this signature of Quirk.  I also had mentioned to him that my brother-in-law's name is also Jamie Quirk.  He responded with an "Oh, come on".  I don't think he believed me.  It's true, though. 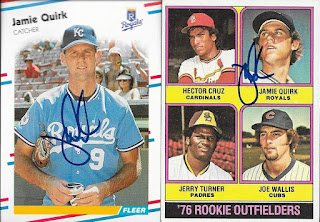 I got some nice cards signed by Quirk.  I don't think all of them are going to go toward my Topps Autograph Project, though.  I want Chris to look and see which ones he wants to keep. 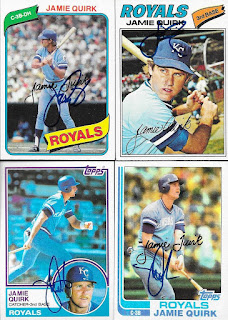 I spent a good bit of time Tuesday night sorting cards and pulling out Quirks.  I did pretty well, I think. 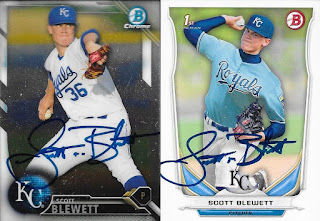 I also went through my rookie box and found some current Blue Rocks players.  I did a really good job this time, I got autos of everyone that I had pulled. 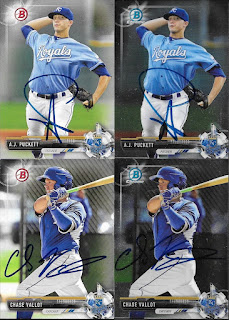 All of the Blue Rocks players are super nice.  They all spoke to me for a bit, and the other graphers, too.  They also won the game with three solo homers in the top of the ninth inning, leaving the score at 3-2. 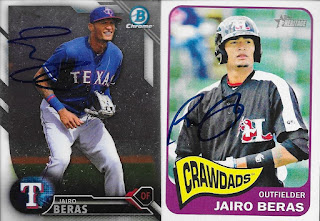 I finally completed Gerard's 50/50 with a 2013 Bowman Chrome mini Jairo Beras.  I was able to keep the above Heritage.  I had also found the above 2016 Bowman Chrome at the Matthews card shop last week while I was in Charlotte for training.  I was glad to be able to get it signed. Chris and I got two-per from Howard Johnson.  I really appreciate that he has signed for me each time I have gone out.  I had a ton of his cards in my collection, and it is nice to transition them over to the autograph album.  More on this in a few... 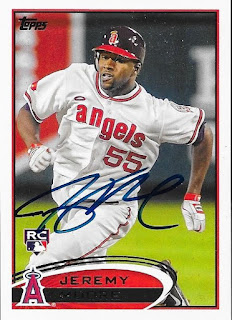 I had missed this during a few trips through my rookie box, but this is a 2012 Topps Jeremy Moore.  I didn't realize he had a card in this set, until Gerard sent me a photo of some cards that he was mailing out for our next 50/50.  I really like the retro-style Angels jersey in this card.  I also liked that I got another opportunity to talk to Jeremy, since he is always really cool to talk to at the games. 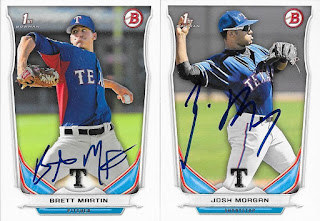 Which leads me to these next autos.  Chris finished off the lot of Brett Martin 2014 Bowman that I had picked up a while back, and the two of us got 12 2014 Bowman signed by Josh Morgan (8 pre-game, since he was the first player on the field, and 4 post-game since he was the last player off the field).  Every time I have gotten a chance to get a Morgan autograph, I have done so.  This has led me to a little flack from a couple close friends of mine.  We all discussed it and worked it out, but it exposed some raw feelings from them regarding the different ways folks graph.  It led to a healthy discussion, but I thought it might be good to bring up here, since we are on the subject.

I want to make it very clear that I, in no way, shape or form harass the players when I get an auto (or multiple autos).  I am always respectful and always thank them for their time (be it in person, or TTM).  That's how everyone should be.  I got the heat from my friends because I left last night's game with 12 autos of Josh Morgan, and had purchased a 52-card lot of 2014 Bowmans off of Ebay of him for $10.00.  The reason I bought this lot was because it was the cheapest lot on there, and I figured that I would be able to have some easy gifts for friends in care packages, or hand the unsigned ones off to fellow graphers at games.  It was never my intention to harass Morgan and have him sign all of the cards.  He told me early this season that he would sign anything I have, and has done so at each game that I have attended.  I mostly have been getting cool parallels signed that I think would look nice in my album, but I have also put a dent in the 52-card pickup.   Each time Josh has signed for me, we talk about his season, the club, how the game went, etc.  I also invited him to attend Dad's race while they were in Winston-Salem a couple weeks ago.  He is and has always been very friendly, and has never let off that he is annoyed by my asking for him to sign cards.

So, that begs the question, is there truly a line when doing graphing?  In my mind, there is, and it goes back to the above when I say that you should always be respectful of the player.  If they are in a hurry, I only present one or two cards.  I try to set up my autograph book with 4 cards on a page.  I never flip a page on a player to get more than the four.  I will ask before and after a game, and have had some in the past refuse at either of those times.  I know folks who set up their autograph books with 20 cards on a page.  While I wouldn't do that, who am I to call them out on that?

Others see graphing as a competition and elbow others out of the way.  I don't do that, either.  I will let kids in front of me each and every time.  I will also help other graphers by identifying players who I know, in case they don't recognize them.  I point folks to the best place to get an auto.  There's no sense in being a jerk to fellow graphers.

I understand my friends' point in that it, on paper, appears that I am taking advantage of these players by asking for multiple cards, and there not seeming to be a point of having "52 of the same signed Josh Morgan cards".  Trust me when I tell you that none of them are for sale, and a good many have already been sent to friends.

I was a little upset initially when my friends spoke out to me about "my graphing tendencies", but I do believe this is a discussion that lends itself to some good back and forth banter.  We all do things differently, and friends don't always have to agree on what the other person is doing.  From a societal standpoint, it is far too easy these days to "block and unfollow" someone if they have a differing opinion than you.  I am grateful to my friends who, instead, told me how they felt, and were willing to discuss it and work through it.

So, my question is, how do YOU graph, and is there a right or wrong way to do it?  I, for one, am going to try to be conscious of what I am doing, but I don't foresee any changes to my habits.  I also feel as if it is opinion based, and folks go about it differently.  I'm cool with that.

By the way, I didn't have any cards for Martin this time around, Chris had gotten them before he and I started talking about Dad's race.  All while he was talking, he was looking at my autograph book for something to sign.  He is such a nice guy, and I hope he can come back from injury soon.  I also intend to talk to Josh Morgan about how he feels about signing for folks.  That might make for an interesting follow-up post.  We'll see what I can get the next time I am able to go.
Posted by William Regenthal at 6:27 PM