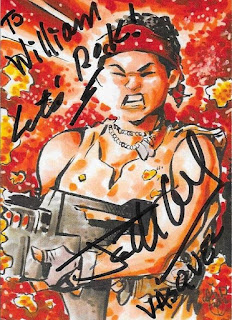 Sometimes, when I send out TTM requests, I manipulate them by putting certain kinds of stamps on the return envelopes, so I have a bit of an idea of what could be inside when it comes back.  Today, it worked wonders, as I was able to call my wife into the room when I saw one of the three envelopes that was in the mail.  Actually, the envelope was a surprise, as I had only seen two when I pulled the mail out of the mailbox.  This one was stuck behind another, and I missed it initially.  When I saw the banana split stamp and the post mark from Los Angeles, I had a pretty good idea what was in store for me.  I called Mal into the room and showed her the envelope.  When I opened it, I said a certain four-letter word followed by "YES".  I had a TTM autograph of the actress who played my favorite character in my favorite movie.

Jeanette Goldstein played Private J. Vasquez in the movie Aliens.  I have been a fan of the movie since we got it on Fox Home Video way back a long time ago (probably 1986 or 1987).  Mom was in some movie club, and I remember a bunch of Fox movies coming in all at once.  Or so it seemed.  Anyway, I always enjoyed the Vasquez character, especially her exchange with Bill Paxton's Hudson "Hey Vasquez, have you ever been mistaken for a man?" "No, have you?"  She has a bunch of great scenes in the movie.  When Paxton passed away earlier this year (#RIPBillPaxton), I thought I should really push to get Goldstein's autograph.  I used the website fanmail.biz for her address, and sent the request via her talent agency.

The card itself was something else I had to get done especially for this TTM request.  I had met a comic book artist a few years ago at Comic Book day at the local comic shop.  His name is Chris McJunkin, and I friended him on Facebook soon after meeting at the shop.  Turns out, he and I have a couple mutual friends, which is nice, but I contacted him to see if he had done any art of Vasquez and if I could purchase a couple that were baseball card sized.  He had not done anything with Vasquez on it, so I had to commission him as an artist to create the card for me.  I had no problem doing so, as I am a firm believer in artists getting paid for their work.  He ended up hooking me up with extras (I commissioned him on a second work along with this one that is not yet able to be discussed... stay tuned), and I sent a copy of the card to Goldstein for her to keep as well (and she did).

I can't describe how excited I am to finally have this from Jeanette Goldstein.  Upper Deck did an Aliens Anthology set last year, but Vasquez was left out, and there were no autos of Goldstein.  Paxton and Sigourney Weaver <3 are="" autograph="" in="" p="" set="" the="" though.="">
I mailed to Goldstein via her talent agency on April 11 and got the card back today, for a 69-day TAT.

You can see Goldstein in action in Aliens, of course, and also in Titanic, Terminator 2 - Judgment Day and Near Dark.
Posted by William Regenthal at 8:23 PM