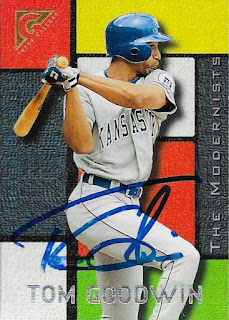 This was a TTM success that took two tries, but I finally received from Tom Goodwin.  I had received a failure (a RTS) last year and held onto the cards for a while to see if I could try again.  I saw that he was signing with the Mets, so I sent there.  In the meantime, I swapped out one of the cards I was sending for this 1996 Topps Gallery that I picked up while I was at Andrew's.  It turned out pretty nice, even though the sicnature smeared a bit.  I baby powdered the card, but with how glossy these are, I think I need to use an eraser on them.  I may try that the next time I send one out. 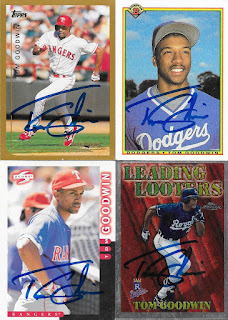 I got these four cards back as well.  They all turned out pretty nicely, I think.  I especially like the 1999 Topps, since I didn't have very many of them in the album. 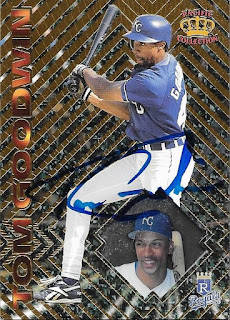 This 1997 Pacific Collection Prism turned out great.  I love these cards and have been able to get a couple of them signed now.  They look great in the album, and I hope I can add a few more from that set.