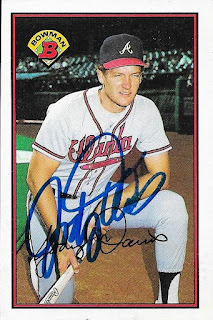 A few TTM successes have rolled in here and there over the last week.  I still haven't mailed out a whole lot lately, but I plan on doing a few this week.

This success from Jody Davis was nice because I was able to use the above 1989 Bowman.  Back when I got into collecting cards, I hated these Bowmans because they didn't fit my album pages.  Now, I kind of like them because they look pretty cool when signed.  I have quite a few 1989 Bowman in one of my boxes, and have pulled a few to send TTM.  Sometimes they make the cut, sometimes they don't, and they end up in TTM starter packs. 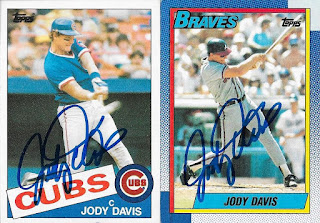 I mailed to Davis on May 17 and got the cards back on June 3, for a 17-day TAT.  I mailed to him via the Louisville Bats.
Posted by William Regenthal at 12:29 PM