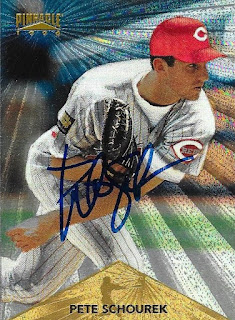 I sat on these Pete Schourek cards for a long time because I kept finding him in my card boxes and figured I would wait until I had plenty to choose from.  I did get a nice stack going, and used them to populate a few sets that might be a little under-represented in my albums.  This above 1996 Pinnacle Museum was the one card that I really wanted to get back.  It turned out great. 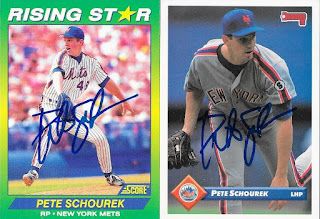 The 1992 Score Rising Star turned out really nice, as well.  It will be a colorful addition to the album, as I see that I ended up choosing mostly white bordered cards for this TTM request.  Maybe I should have thought that through a little more.  I did like the 1993 Donruss due to the Mets jersey, though. 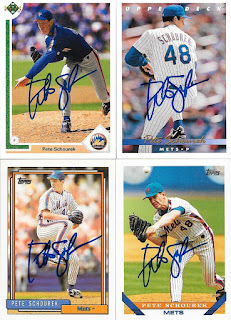 I wanted a couple Topps cards, as usual, so I included the 1992 and 1993 on the bottom.  I also don't have very many Upper Deck represented in the albums, so I used this opportunity to get a 1992 and 1993 Upper Deck signed.  They usually aren't my first choice to get signed, but they look nice, I think.